My research program sits at the intersection of paleontology, geology, and evolutionary biology and aims to elucidate the causes and consequences of major transitions in early mammalian evolution, such as:  the Cretaceous Terrestrial Revolution, the Cretaceous–Paleogene Mass Extinction, and the Paleocene–Eocene Thermal Maximum.  Using a combination of paleontological and geological fieldwork, systematic study of fossil collections, and analyses of the functional morphology, ecology, histology, and isotope geochemistry of modern and extinct mammals, my work scales from species-level studies of ecology, behavior, and life history, to ecosystem-level studies of biodiversity, tectonic and fluvial history, and climate.

My research program is guided by the following broad questions, which all center on understanding (1) the processes that promote or inhibit biodiversity and (2) how those processes change through time and space:

• How do terrestrial ecosystems (re)assemble during and after major environmental perturbations, such as periods of mountain building, mass extinction, and climate change?

• When in geologic time, where phylogenetically, and why (intrinsically or extrinsically) did complex behaviors and life histories evolve in early mammals?

• What are the long-term evolutionary effects of ecological innovations on mammalian species, clades, and communities? 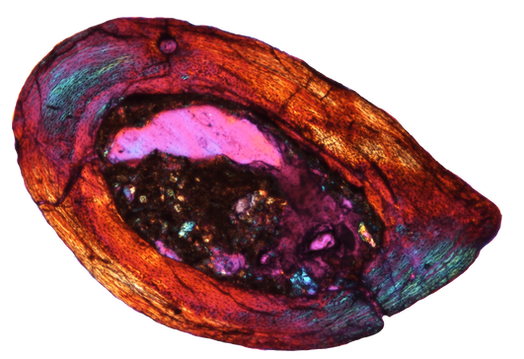 Histological cross section from the femur of Mesodma, a multituberculate mammal from the Late Cretaceous and early Paleocene of North America.